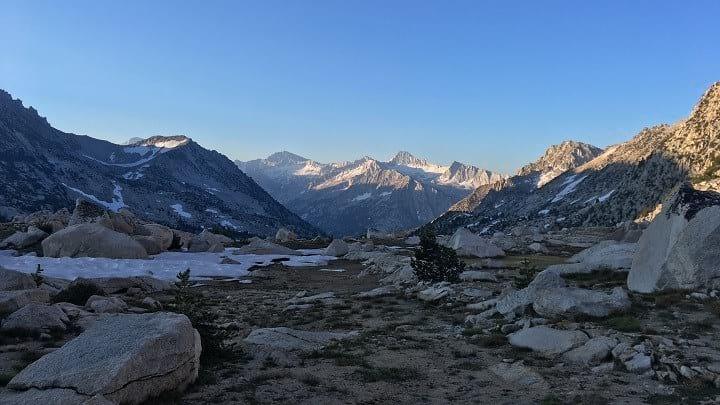 That said, the KCHBR and SHR only share two passes in common and are very different adventures. Besides obvious differences such as length (the SHR is 195 miles while the KCHBR is 124 miles), both routes have their own feel or personality. Andrew Skurka has mentioned some differences, but I haven’t found a more in-depth comparison of these two High Sierra routes.

Last month, I hiked the KCHBR with three friends: Sprout, Lionel, and Baboon. Two of these friends had also completed the SHR (Sprout completed it in August 2017 with me, while Lionel hiked it in August 2018), so naturally during our KCHBR hike we often compared it to the SHR. Here is how we found that the two routes differ:

Both routes spend some time on the JMT, where you’re going to see people so that’s not what I want to focus on. Instead, I’m talking about the off-trail portions of these routes. During our KCHBR hike, we didn’t see a single other person out hiking while off-trail. Compare that to the SHR, when we each encountered 5-10 other SHR hikers over the same timespan.

The routes themselves seem to reflect this, as the off-trail passes on the KCHBR didn’t have use trails or footprints that are common reassurances on the SHR. While both routes feel remote, the KCHBR, particularly around the Great Western Divide and in the Ionian Basin, felt much more exploratory than any section of the SHR.

That said, the SHR was first published in 1982, while Skurka’s KCHBR is less than a decade old, so it makes sense that there is less traffic on this newer route.

The KCHBR has more vertical gain/loss per mile. 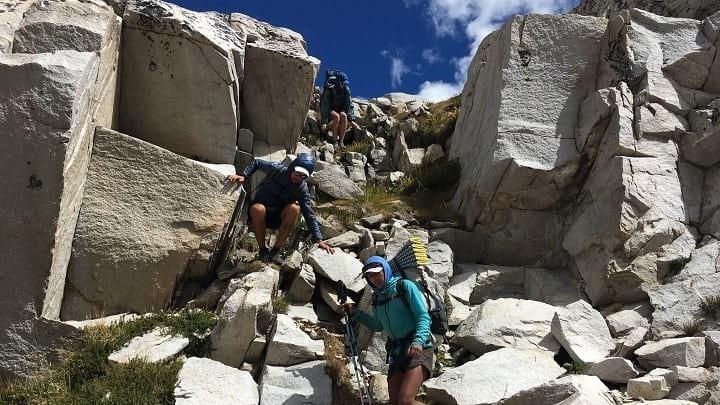 Typical grade on the KCHBR.

The passes are easier on the KCHBR, but the KCHBR has the hardest pass of them all.

This was a subjective observation, but all three of us felt that, on average, the KCHBR passes were less technical than their SHR counterparts. The time of year might have played a part (hiking the KCHBR in September is easier when there’s no snow), but the vast majority of KCHBR passes were Class I walk-ups or easy Class II scrambles. Many SHR passes are the same way, but memorable passes such as Snow Tongue, Frozen Lake, Mount Conness’ East Ridge, and Sky Pilot Col were trickier than just about any part of the KCHBR.

That said, the KCHBR contains the hardest pass out of both routes: King Col. A steep chute with loose scree crumbling away on top of hard dirt, it was by far the trickiest—and most dangerous—part of either route. For prospective KCHBR hikers, strongly consider an alternate route. King Col is an ugly descent, and the climb out of Woods Creek into the Arrow Basin is equally challenging. While KCHBR passes might be easier on the whole, Skurka’s recommended route contains small sections that are notably more difficult.

There are fewer trail miles on the KCHBR.

I don’t know the exact numbers, but the KCHBR has fewer trail miles than the SHR. By rough estimates, about 30% of the KCHBR is on trail compared to 35-40% of the SHR. That’s not a huge difference, but enough to be noted.